Is this proposed budget just a dream? A study conducted by health groups HEAD and AHW revealed that there are enough sources to fund a P90 billion ($$2.037 billion) health budget, if the Aquino government has the political will to do so.

MANILA — “In the face of dengue cases doubling this year (compared to last year), the health department’s budget for dengue and other communicable diseases did not increase,” said Dr. Gene Nisperos, vice-president of Health Alliance for Democracy (HEAD). In fact, the Aquino government’s proposed budget for health in 2011 is so “very little and inadequate,” it “decreases the allotment for public hospitals and subsidy for indigent patients’ hospitalization,” said Emma S. Manuel, national president of the Alliance of Health Workers (AHW).

“Expect the health services to worsen further in government hospitals,” the two health leaders warned, if Aquino’s proposed budget for health is not increased by Congress.

In hopes of arresting this downward trend in government prioritization of public health, AHW and HEAD have embarked on another campaign this year to prod Congress to increase the health department’s proposed 2011 budget, from the P32.028 billion ($724.9 million) it submitted to P90 billion ($2.037 billion).

The two health groups asked the Aquino government to walk the talk in prioritizing social services and instituting change or reforms.

This week the AHW and HEAD attended the congressional budget hearing to explain to legislators why the country needs “at least P90 billion for starters” to ensure that the public health care system “can address the most urgent health needs of the people.”

As early as last July, these health groups have been seeking an audience with President Benigno ‘Noynoy’ Aquino to discuss their doable proposals for improving the country’s health care. Unfortunately, they said, Aquino has so far failed to allot time for them.

AHW and HEAD said they have had a dialogue with Health Secretary Dr. Enrique Ona last July. Ona reportedly told them he believed the health department needed at least P60 billion ($1.358 billion) for next year. But the two health groups were disappointed to learn that the DOH has proposed only a “minuscule” P32.028-billion ($724.9 million).

In a press conference held last week, HEAD itemized why they came up with a minimum of P90 billion ($2.037 billion) proposed budget for health for 2011. The AHW and HEAD made it clear that only this amount, or more if possible, could indicate that Aquino is indeed serious in introducing change or reforms and treating the people as his “boss.”

The needed P90 billion ($2.037) health budget, they said, is not yet the ideal amount that could already spell change. But it will help the country’s public health care system to function without depending too much on pork barrel, squeezing its predominantly poor patients, or taking in profit-driven investors, said Nisperos.

The World Health Organization’s recommended health budget is at least five-percent of the country’s gross national product, or around P440 billion ($9.959 billion) for the Philippines.

The current scenario in the country’s remaining 55 publicly-owned hospitals is such that with this year’s spike in dengue cases, for instance, two patients have to share one bed, said Emma Manuel of AHW. A child ill with dengue can still die while waiting in line in hospitals because of the lack in facilities and personnel, added Manuel.

She recalled a child with dengue who had a very low 40 platelet count when first brought at a government hospital’s emergency room. When he was finally admitted hours later, his platelet count had dwindled to a dangerously low 12.

“It is not the fault of health workers,” stressed Manuel. With so few of them compared to the number of patients, they also had to deal with scarce equipment, medicines and supplies. Thus, they could not attend to patients fast enough.

Dr. Eric Tayag, head of the health department’s epidemiology center, apologized to the public Wednesday as the so-called Dengue express-lanes in public hospitals have turned out to be “bagal (snail-paced) lanes,” due to lack of facilities, supplies and personnel.

Nisperos slammed the sorry fact that many public hospitals lack many basic equipment and supplies such as incubators, hospital beds, reagents and medicines. How much more, Nisperos said, when it comes to advanced medical equipment?

Worse, Nisperos said the present ratio today of nurses to patient and doctors to patients are very far removed from the World Health Organization’s prescriptions.

The shortage in many emergency life-saving equipment and medicines in public hospitals, coupled with the fact that Filipinos now have to pay for a lot of things first (from laboratory fees to hospital supplies) before their illnesses can be diagnosed and treated, have been turning off many poor patients, said Manuel. The unfortunate result is either the patients go to public hospitals only when their illnesses have gotten too worse to treat, or they just die without medical care.

“No Filipino should be deprived of health services because he/she has no money. No Filipino should succumb to disease simply because there is no healthcare facility nearby. Women should not die of something so natural as pregnancy and child-delivery,” said Nisperos.

Dr. Gene Nisperos of the Health Alliance for Democracy says that the country needs a health budget of at least PhP90 billion. (Photo by Marya Salamat / bulatlat.com)
But based on the Aquino government’s proposed budget for health next year, the dire situation of scarce hospital facilities, supplies and personnel threaten to even get worse.

Compared to the 2010 budget, Aquino’s 2011 budget has decreased much of the funds for basic services, said Nisperos.

Aquino’s national budget “stresses more the modernization of the Armed Forces of the Philippines through increased budget for recruitment of additional soldiers, CAFGU, intelligence and arms procurement,” the AHW said in a statement. The health group warned that this could only “worsen militarization, counter-insurgency operations and result in more human rights violations and repression of the people.”

“The 2011 budget gives priority to defense as the third highest, with an 81 percent increase, and to debt payment (which is already almost a fourth of the entire national budget),” said Manuel. She calls it “ironic” because President Aquino often claims that providing social service is the priority of his administration and that his administration’s proposed budget is a “reform budget.”

Instead of Aquino’s P32.028-billion ($724.9 million) budget for health, the two health groups dared the Aquino administration to put money where its mouth is. “A P90 billion budget makes it feasible to work for immediate remedies to the most pressing health problems, while paving the way for more long-term solutions.” 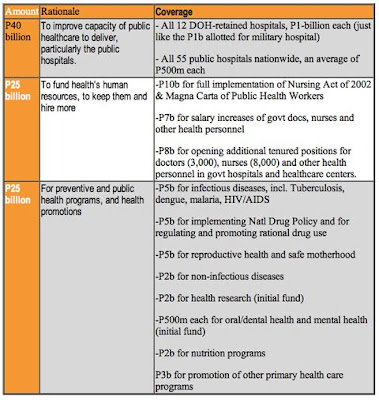 The proposed PhP90-B health budget. (Prepared by HEAD and AHW)

The current major areas of health concern in the country are the focus of the P90 billion ($2.037 billion) health budget, as opposed to the minuscule P32.028 billion ($724.9 million) initially proposed by the health department, said the HEAD. The Philippines is in dire need of a P90 billion ($2.037 billion) budget to address the “lack of healthcare services, loss of health personnel and the need to focus on preventive aside from curative care.” The government also has to confront “chronic health problems such as high maternal deaths, prevalence and recurrence of infectious diseases and high prices of drugs.”

Is this proposed budget just a dream? A study conducted by HEAD revealed that there are enough sources to fund this alternative budget. The political will on the part of the government is what is needed, said Nisperos.

Aside from reallocating existing funds, HEAD suggests looking into trimming the P80 billion ($1.8 billion) increase in debt payments. There is also an estimated P170 billion ($3.8 billion) that could be made available if the government eliminates corruption. There are billions more of unpaid corporate taxes that the government needs only to muster the political will to collect, said Nisperos.

Saying if there is a will there is a way, Nisperos explained that the P90 billion ($2.037) health budget “is meant to ensure that the right to health is guaranteed and fulfilled by the Aquino government.” Toward ensuring this right, Nisperos said, their proposed health budget  “challenges the current policy of healthcare privatization and the corporatization of government hospitals.”

What used to be a majestic  concrete two-storey building located at the top of the hills of Barangay Cambanac, Baclayon, is now damaged after Typhoon

The fullest attainment of health is possible only in a society that ensures the opportunity and power of individuals to develop one’s potentiality and creativity through the democratic and participatory processes of its social institutions.

The Visayas Primary Healthcare Services, Inc. (VPHCS) is a non-stock, non-profit, non-government organization which aims to promote primary health care programs in the Visayas regions. The VPHCS assists people’s organizations in the marginalized sectors of society – urban poor dwellers, farmers, fisherfolks, women and children — in building and strengthening community-based health programs (CBHPs). It was registered with the Securities and Exchange Commission on April 2, 2008 with Registration number CN200825945.